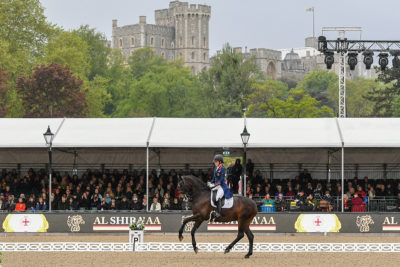 Charlotte Dujardin riding Erlentanz, winners of the Al Shira’ss Grand Prix (CDI4*) during the Royal Windsor Horse Show held in the private grounds of Windsor Castle in Berkshire in the UK between on 8th-12th May 2019

Organisers of Royal Windsor Horse Show have announced that this year’s dressage competition will run a Grand Prix and Grand Prix Special format ahead of the Olympic Games this summer. The prestigious event will be the first 4* show in the UK to run the new combined format and will provide Team GBR hopefuls and international riders with a rare opportunity to perform the test in front of Olympic selectors and a large audience ahead of Tokyo 2020.

The CDI4* FEI Al Shira’aa Grand Prix and Grand Prix Special will take place on Thursday 14 May and Friday 15 May at Royal Windsor Horse Show respectively and organisers expect it to attract top dressage partnerships looking to gain valuable experience in the new format ahead of the Games.

Following the Tokyo 2020 format, each athlete competing in the Grand Prix Special will be required to provide a music soundtrack to accompany their test, although the music will not be marked. Show organisers are supporting the athletes by offering the services of renowned dressage music technician, Markus Hinzke, who will help athletes in the selection of their accompanying music. Organisers believe that this offer will encourage more competitors to compete at Windsor, using it as a trial for Tokyo 2020.

The Grand Prix Special will form the medal competition for the Team Championship at the Olympic Games. Royal Windsor Horse Show will provide a special opportunity in the UK for an audience to see the Grand Prix Special test to music, and for riders to trial it in a competitive environment. Therefore it has an important role as a stepping-stone towards Tokyo for both riders and selectors.

British Dressage star, Richard Davison said: “To be able to perform the Grand Prix Special set to music this spring at Royal Windsor is really a great opportunity for all riders hoping to compete in Tokyo, especially as Team GB selectors will be attending the Show. The new format is a major change to the competition but is also an incredibly exciting development for dressage as a sport.”

Simon Brooks-Ward, Show Director, said: “We are really pleased to be hosting the new Olympic Team Medal Format (Grand Prix Special) at Royal Windsor Horse Show. With the 2020 Olympic Games coming up this summer, this is a huge year for equestrian sport and Team GBR Dressage. We hope that by hosting the new format, we will provide our athletes with an opportunity to impress team selectors. This will also be a hugely unique chance for ticket holders to see top Team GB combinations compete on home soil before they head to Tokyo.”

The Show will also be supporting Team GBR by encouraging athletes and visitors to donate to the BEF Olympic fund at point of ticket purchase and entry.

The prestigious annual Show, now in its 77th year, takes place in the private grounds of Windsor Castle for a five-day celebration of top-level international equestrian sport. Royal Windsor remains the only UK event to host first-class international competitions in four of the FEI disciplines: Show Jumping, Dressage, Carriage Driving and Endurance, attracting some of the biggest names in equestrian sport, including Olympic, World and European champions.

In addition to the elite sporting action, ticket holders will enjoy performances from the The Musical Ride of the Household Cavalry, The Household Cavalry Mounted Band and The Musical Drive of The King’s Troop Royal Horse Artillery, as well as fan-favourites, The Land Rover Shetland Pony Grand National and DAKS Pony Club Mounted Games.