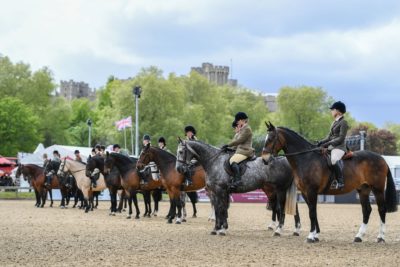 Royal Windsor Horse Show has today announced that entries for National Show Jumping classes will open on Tuesday 3rd March and Thursday 5th March for all other National classes, including all Showing classes. Organisers of the popular Show, now in its 78th year, expect a record number of entries for the 2020 edition of the event which will take place from 13th – 17th May.

The prestigious Show, which welcomes over 50,000 spectators every year to the private grounds of Windsor Castle, is the only UK show to host four FEI disciplines – Dressage, Jumping, Driving and Endurance – alongside over 140 Showing classes, Pony Club, Schools and University Show Jumping, and National Show Jumping classes. The week’s programme, which takes place across the Show’s five arenas, is expected to attract top equestrian competition.

Alongside six International Show Jumping classes with a total prize fund of €625,000 – including the prestigious Rolex Grand Prix on the Sunday – RWHS hosts 10 National classes. Available to enter from Tuesday 3rd March – Tuesday 10th March, these include crowd favourites such as the Land Rover Stakes and the Land Rover National 1.40m Open Competition. Hosted predominantly in the main Castle and all-weather Frogmore Arenas, the chance to jump in the iconic location in front of Windsor Castle is a highlight for competitors and attracts some of the biggest names in British Show Jumping alongside up-and-coming riders.

Entries for International classes at RWHS will be announced separately. FEI Dressage entries are already open (closing 22nd April) and those for FEI Jumping, Driving and Endurance classes will open shortly. This year, RWHS also welcomes a new Arena Eventing class on the Wednesday, meaning that all three Olympic disciplines are now represented at the Show.

Royal Windsor Horse Show is the jewel in the crown of National Showing and hosts a huge variety of classes, from traditional Hack, Hunter and Show Pony competitions, to breeds from both the UK and around the world including Mountain and Moorland Ponies, Appaloosas, Arabs, and Spanish and Portuguese horses. Alongside these categories, sections for Sport Horses, Polo Ponies, Side Saddle and Riding for the Disabled classes give every opportunity to show off the best British equines at the top of their respective fields. Each class is judged by a specifically appointed steward, who brings to their role a wealth of knowledge and experience.

Simon Brooks-Ward, Show Director, said: “Each year I continue to be impressed by the high number of entries we receive from so many riders around the country. National classes at Windsor are always hugely popular, and it’s great to see the hard work, dedication and enthusiasm of so many competitors pay off as they travel from across the UK to the Show. With such a wonderful array of classes, horses and competitors, I’m certain this year’s Show will be a resounding success.”

Highlights of the National competitions at Royal Windsor Horse Show 2020 include:

More information on how to enter can be found here.